Arecibo Observatory in Puerto Rico boasts “the largest and most sensitive radiotelescope.”

Amateur radio operators haven’t worked EME (Earth-Moon-Earth bounce) via the Arecibo radio dish since the 1970s, so it was quite special to have some windows of time open to use the dish on April 16, 17, and 18, 2010.

Several club members participated in an effort to enjoy some EME communications, including the construction of a special antenna for this event! 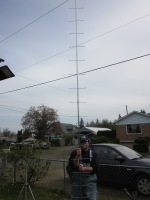 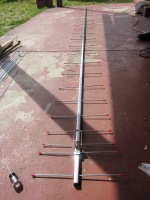 Having been told about this EME radio event just ten days before it was scheduled, David KC7USS proceeded to build a sensitive 70cm antenna using scrap aluminum and some old antenna radials. 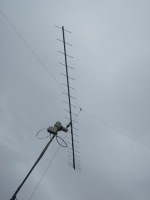 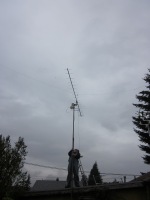 Omer AD7DY built the T-matching unit for the antenna. David has worked all states on satellites using a homebuilt azimuth and elevation rotator system built by Marsh NC7V and David. Dual band “Texas Potato Masher 2” antennas (see below) were built by Omer from a design by Jerry K5OE.

After the antenna was connected our amateurs gathered around the radio to listen to signals from the Arecibo dish. They had live video feed from the dish to show people that they were transmitting. They heard bits and pieces of words from the moon. It was this way for three hours during the window that Arecibo was in the moon’s line of sight.

The next day, David put his pre-amp on the antenna line. This allowed CW stations working Arecibo to be heard. 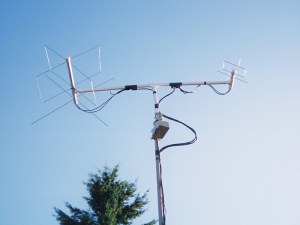 And just as interesting, David has multiple phased Lindenblad antennas he built for satellite use! 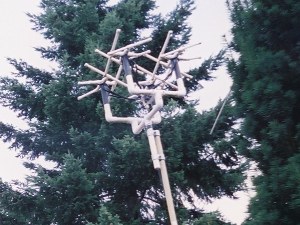 This entry was posted in Articles for Hams and tagged antenna, Arecibo, EME, homebrew. Bookmark the permalink.
%d bloggers like this: